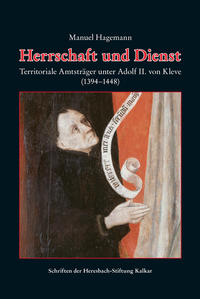 Adolphe II of Cleves (1394-1448) is a central figure in the history of the medieval Lower Rhine Region. During his reign Cleves was elevated from county to duchy, and gained its independence from the archbishop of Cologne’s overlordship. This changing status was made possible by a shrewd strategy of marriage alliances: Adolphe II married daughters of Rupert of the Palatinate and John the Fearless. The Burgundian alliance, to which his descendants also adhered, was particularly instrumental in these volatile times. Adolphe II took part in more than twenty military conflicts.

Herrschaft und Dienst’s main focus lies not on Adolphe II as an individual, but rather on the officials that manned his administration and asserted his authority in people’s daily lives. The book is based on the PhD thesis of Manuel Hagemann, defended at the Rheinische Friedrich-Wilhelms-Universität during the academic year 2014-2015. The aim of this thesis was to identify as many officials of Adolphe II as possible in order to examine both their background and relationship to their ruler. In this way the book contributes to the history of late medieval state building in the Holy Roman Empire.

The choice for Adolph II’s government in particular is valuable because the principality of Cleves is better documented than most of its neighbours. One might even say that Adolphe II played a pioneering role in the late medieval Rhine Region by introducing a far more extensive chancellery along the lines of the Burgundian administration. It should be mentioned, however, that the author only considers officials serving within Cleves and not those active in any of Adolphe II’s other possessions (the county of Mark, the lordships of Ravenstein and Wijnendale).

The book consists of two main parts: the actual study (p. 11-370) and an extensive appendix (p. 373-856). The introduction explains not only the book’s main aim and the rationale for concentrating on Cleves during the reign of Adolphe II, but also gives working definition of ‘office’ (Amt). The next chapters continue with an extensive description of the reign of Adolphe II, with a particular emphasis on political-military events, before giving an overview of the organization of court and government. The fourth chapter provides an extensive analysis of officials’ social background and strategies of advancement, and makes a distinction between members of the ‘Knightage’ (Ritterschaft) and patrician families.  The final chapter is relatively short (p. 277-310) and further explores the relationship between ruler and his officials. The conclusion summarises the main findings and provides an outlook on the place of Adolphe II and his reign in the development of government in late medieval Cleves.

The appendix is very thorough and clearly shows the author’s extensive archival research. The first segment gives an overview of the people who held a specific office, marshal of Cleves for example, during the reign of Adolphe II. The second segment provides an impressive alphabetical list of all known office-holders with the information the author has been able to gather about a specific individual. This includes an official’s approximate date of birth and death, his family, social and geographical background, whether he had any landed possessions and/or a university education.

The book certainly lives up to its promises: Herrschaft und Dienst provides an authoritative overview of all officials serving Adolphe II in the principality of Cleves that will undoubtedly proof to be of lasting value. If there is one point of criticism, it is that the author does not really explore connections between Cleves and Burgundy in terms of their administration. Adolph II grew up in the Duchy of Brabant and Soissons, and sent his children to be educated at the Burgundian court. Given the amount of literature on the Burgundian government, it would have been useful to consider to what extent the count copied Burgundian administrative practices and whether any exchanges of personnel occurred. The author mentions at least two officials who served both Burgundy and Cleves, but these examples are not further explored (p. 158-159). He does study other officials, however, who served both Cleves and Guelders. Perhaps the first two chapters, on the reign of Adolphe II and the administration of the county/duchy, could have been shortened to create more space for examining connections between Cleves and other principalities.

In conclusion, Manuel Hagemann’s Herrschaft und Dienst provides a valuable reference work that is indispensable for anyone interested in the history of Cleves or the political history of the late medieval Rhine Region. We can only hope that such extensive prosopographical studies will continue to be published in the future.